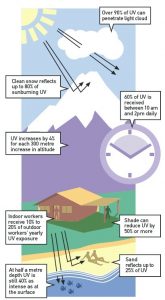 What is Ultra Violet?

Some colors of wet pour surfacing are more prone to higher levels of degradation from UV (ultraviolet) light exposure. This means that certain colors in the manufacturing process of the rubber can fade over time because they have been exposed to ultra violet radiation from the sun. Generally speaking, the brighter colors are more prone to UV Degradation and during this process the sunlight radiation attacks the synthetic polymeric within the EPDM material, leading to a loss of the original vibrant color.